Who Killed Kristin and Bob?

Trooper Meidinger – One of the last to see them I was busy doing paperwork and these two individuals came into the office . . .

The following interview is an excerpt that took place on Friday September 25th, 2015 between myself and retired North Dakota State Trooper Wes Meidinger.   This interview will be published in print in its entirety at a later date.

Twenty-two years ago Robert Anderson and Kristin Diede disappeared from Wishek, ND. Since then, some of the once clean and original factual details regarding the disappearance of Kristin Diede and Robert Anderson have been kicked around a bit.  More than kicked around in some cases.  In some instances, the original hard facts have been beaten up and embellished and are now instead tagged with faulty jagged edges.   An impatient and careless researcher can easily get nicked when haphazardly grasping for any rusty clue that comes along.  This creates a dilemma. To not follow every and any lead is to risk overlooking the truth.  The downside?  Hours (or perhaps years) of looking in the wrong places, following decomposed clues and walking down dead-end paths.

One such detail concerns the last confirmed sightings of Robert Anderson and Kristin Diede. More precisely, there has been some cluttered information regarding an interaction with a North Dakota State Trooper who was said to be one of the last known persons to have interacted with Diede and Anderson.  While some have questioned if the event occurred at all, there has also been erroneous information circulating regarding the identity and current whereabouts of this trooper. On top of that, there is speculation about what that meeting was all about and what exactly transpired.

Before this particular detail gets abused and contaminated any further, I felt it was important to secure the facts first hand from the Trooper himself.  I finally tracked him down after pursuing a few false leads.  He is alive and well and his name is Wes Meidinger.

For twenty-five years, seventeen of which were spent in the Wishek area, Wes Meidinger served as a North Dakota State Trooper. Meidinger is the trooper who met Kristin and Robert on the last day they were seen.

Now retired from the force, Trooper Meidinger met with me at his home in Bismarck, North Dakota on the evening of Friday Sept 25th, 2015.

As he recounts events in a no nonsense and matter of fact fashion, Meidinger broadcasts an element of calm stability.  After having met him it is not at all difficult to imagine how he served the North Dakota public with a steady demeanor.  A demeanor which conveys clearly that he has little to fear, and nothing to hide.

While modern day technology (and the crime that goes with it) has transformed the console of a squad car into something that resembles a lunar landing module, Trooper Meidinger recalled an era of law enforcement that is no longer with us.   It was an era when a state trooper had only three radio channels to maneuver and when the flashing light overhead was confined to “off”, “yellow” or “red”.

The following is his account of that Sunday afternoon on August 15th, 1993,  the day he became one of the last known persons to have seen or spoken with Kristin Diede and Robert Anderson.

MEIDINGER – It was a Sunday afternoon. It was a weekend I was working. And I had a small office in the Wishek Police department.  I was busy doing paperwork and these two individuals came into the office and were inquiring about validity of court orders pertaining to child custody and things of that nature.  Now, whether they had a court order or were looking to get one I don’t know.  They never showed me a court order but it sounded to me like they had one.  And we just spoke briefly and I referred them to the Logan County State Attorney Gerald Kuhn.  Whether they contacted?  They did not contact him in my presence, whether they did that afterwards? Of course that was in the days before cell phones so they would have had to go to a landline somewhere if they did.  Like I say a brief encounter uh Anderson didn’t say a whole lot.

wolner – Ok I was going to ask you about that if he spoke.

MEIDINGER – He didn’t say a lot. Now they didn’t seem like they were agitated or really antagonistic.  Nothing indicated that, although I got a sense that there was some, what would you call it?  There was some turmoil regarding the custody of the kids.  And from what I could gather her intention was to take them with her to Minnesota.  Minneapolis area somewhere, suburb I don’t know. It was their intent, as far as I know, to go out to the Diede farm and take them with them.

wolner – And that’s Alvin and Laura Diede’s farm outside of Wishek?

MEIDINGER – Yes. They left.  We probably spoke 15 minutes maybe.  And I didn’t get to hear anything more about that until, I believe, the Anderson Family started inquiring about who, what, where and what was going on. How much later I don’t know.

wolner –  I know the first articles to appear in the Wishek Star Newspaper were published in 1996. Could it have been a full 3 years later?

MEIDINGER – I would have thought it was sooner than that but that was the next indication that there was something wrong.    From there, the investigation included the Logan County Sheriff Steve Engelhardt and the Bureau of Criminal Investigation agent, I’m thinking it was Mike Quinn and I did not participate in that investigation.  Those folks are experts on documentation and things like that.

Whether I documented the occurrence I honestly don’t know, if I did it would be in the Jamestown office, I’m not sure, just something brief. Being as it was all verbal without any specific interaction I doubt there is an incident report.

wolner – Did they ever ask you to accompany them or anything like that?

MEIDINGER – No they didn’t.

wolner  – Did you happen to see what vehicle they were driving?

MEIDINGER –  The office was in a basement, no.  I did not see the type of vehicle.

wolner –  As far as you know then there was just the two of them, nobody else outside or with them?

MEIDINGER –  Yes, as far as I know there was just two of them, they were the only ones that came into the office.

I then asked Trooper Meidinger if Robert and Kristin seemed to be under the influence of alcohol or drugs.

MEIDINGER –  There was no indication that they were intoxicated or anything like that.

We need to thank Trooper Wes Meidinger for his contribution to the continued search for Robert Michael Anderson and Kristin Joy Diede.

You can also contribute!   If you have any information pertaining to this case contact the Logan County Sheriff, the North Dakota Bureau of Investigation or send us an email at unsufferus@gmail.com

We would be interested in speaking with a gentlemen named Victor Larson.  Victor was one of Kristin Diede’s neighbors in Bloomington at the time of her and Robert Anderson’s disappearance.

Kristin may have telephoned Victor in Bloomington from Wishek just before she went missing.

I previously wrote that about the uncanny lack of media coverage in North Dakota regarding this case.

The Bismarck Tribune ran its first story about the case last Sunday.

It was front page news on a Sunday.   Read it Here 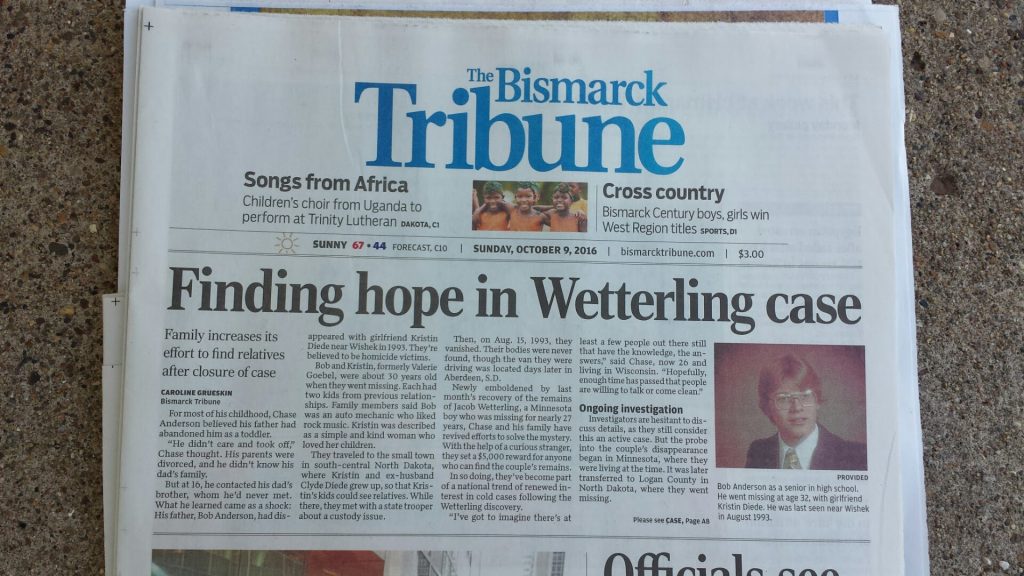 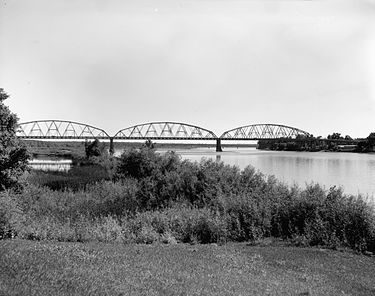 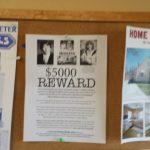 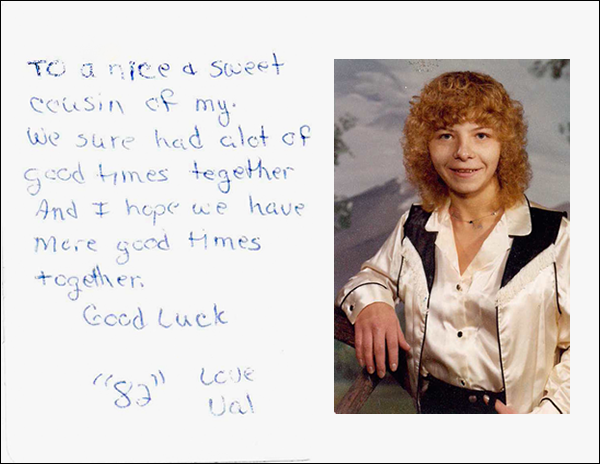 Today, kristinjoydiede.com in association with the family members of Robert Michael Anderson, announced a new reward in the amount of five thousand dollars for anyone who successfully discovers human remains belonging to either Kristin Joy Diede or Robert Anderson.

Print your own flyer to put up in your area. Reward Flyer Download

Many thank to all the businesses in Napoleon, Wishek, Ashely and Ellendale who eagerly agreed to post the flyer for Bob and Kristin last weekend
.   You can download, print and post your own poster by clicking Reward Flyer Download 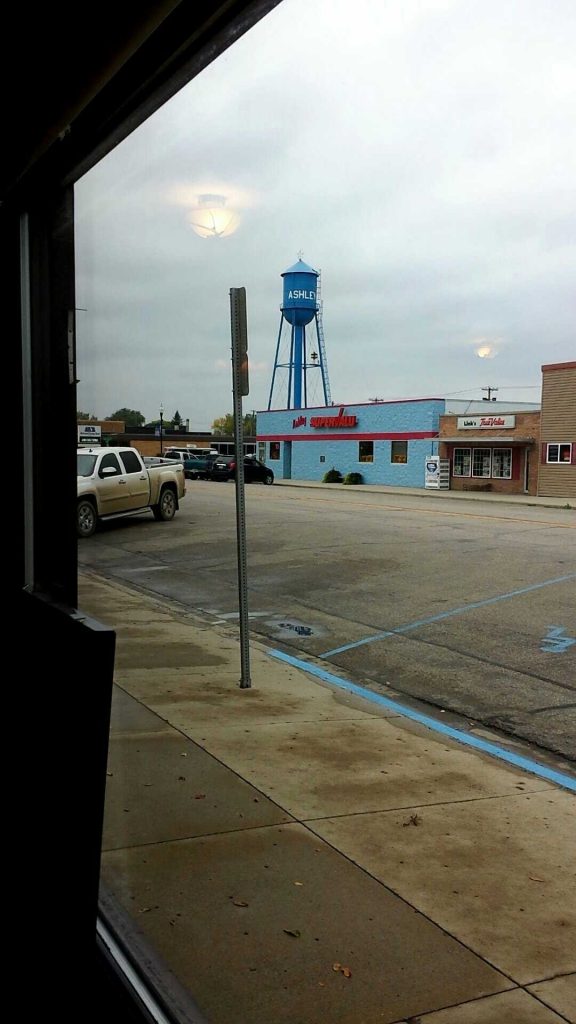 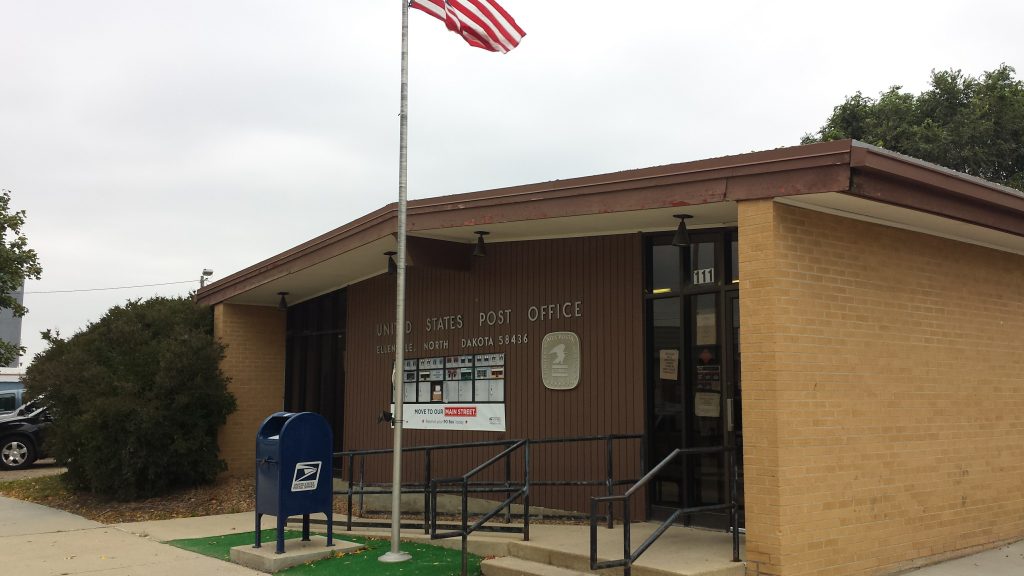 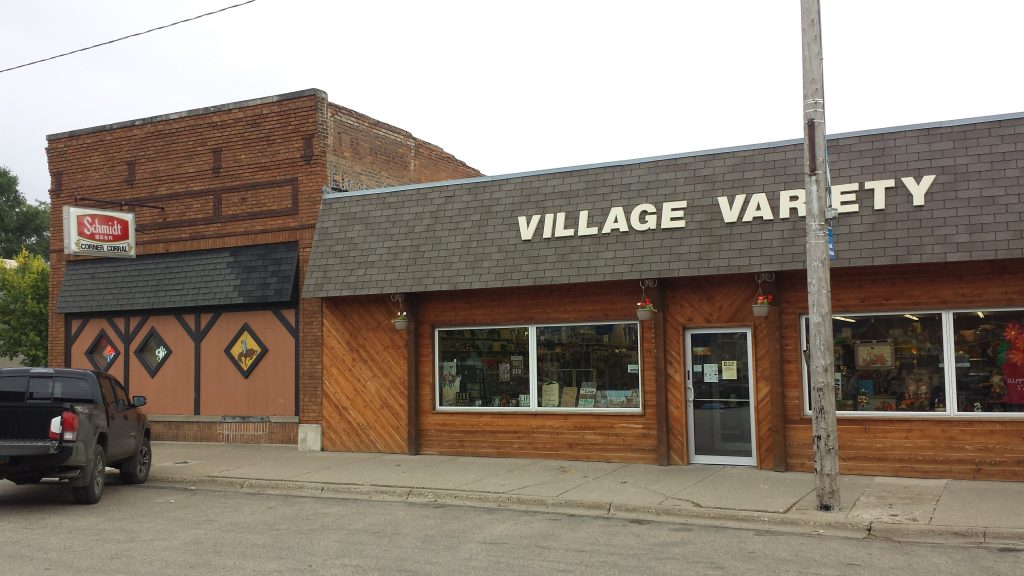 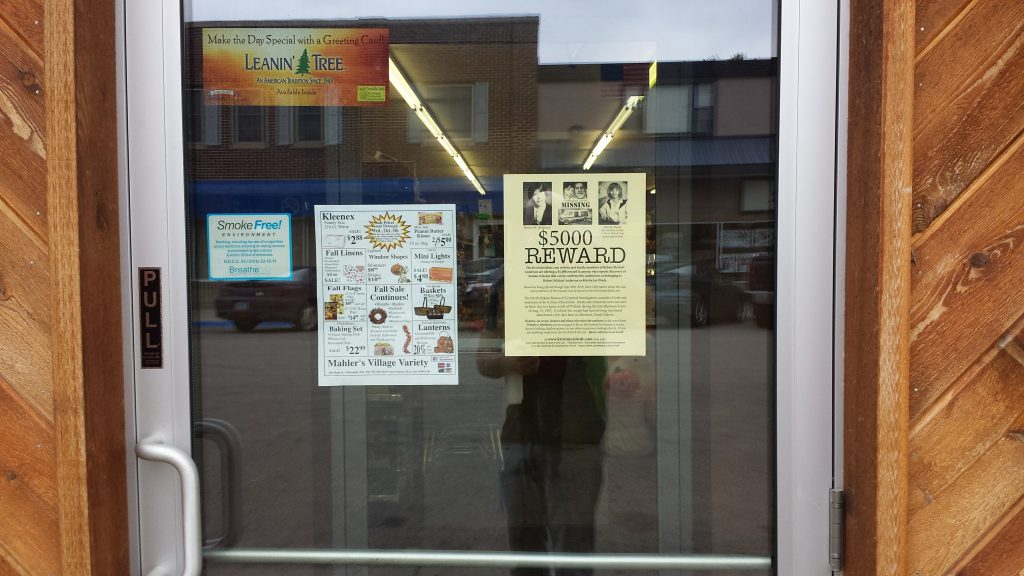 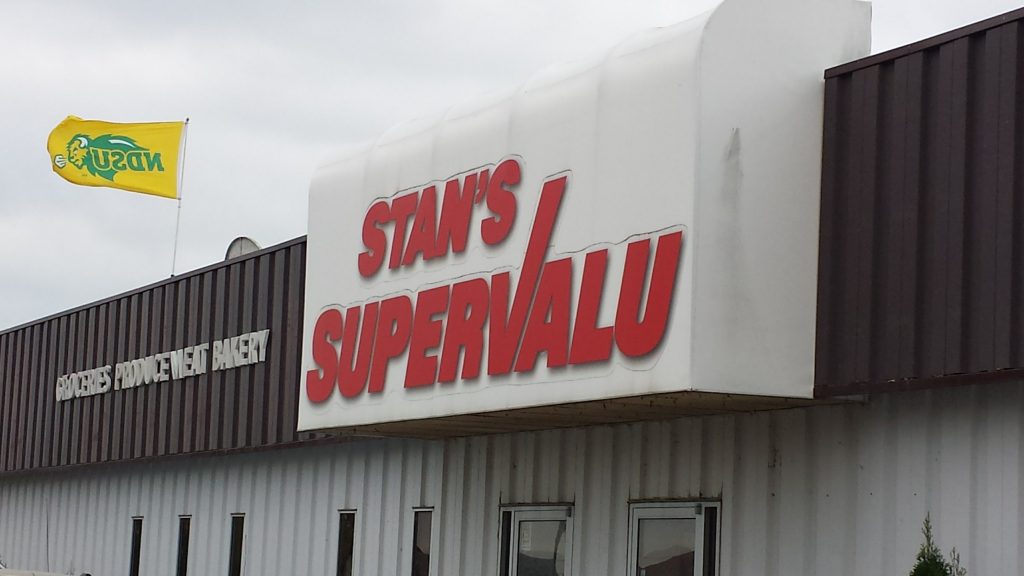 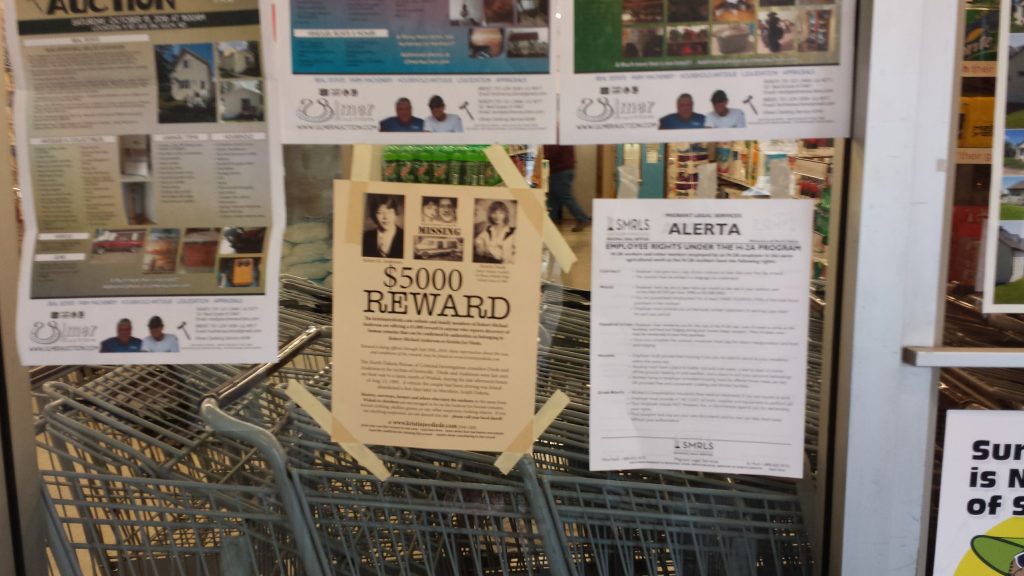 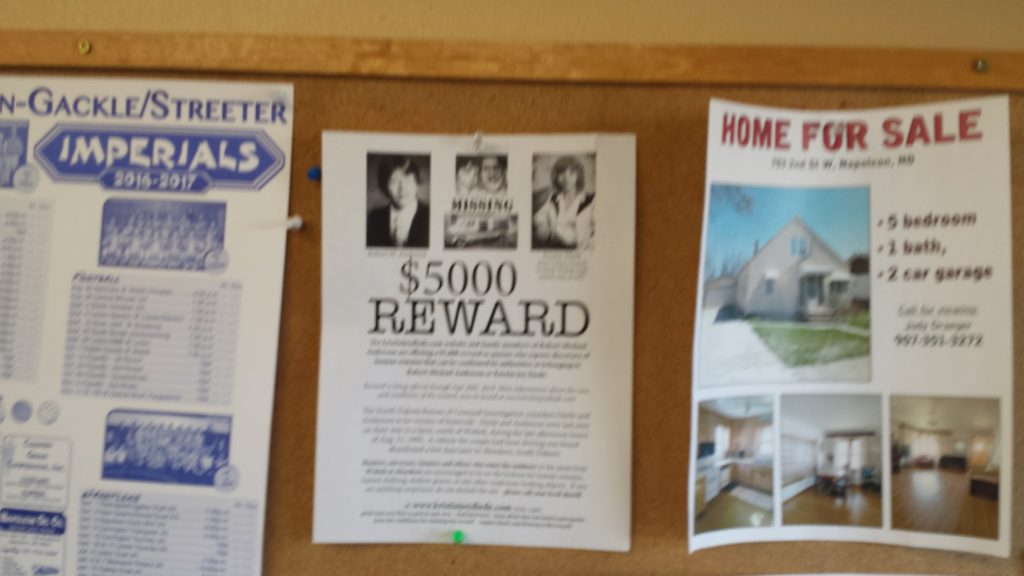 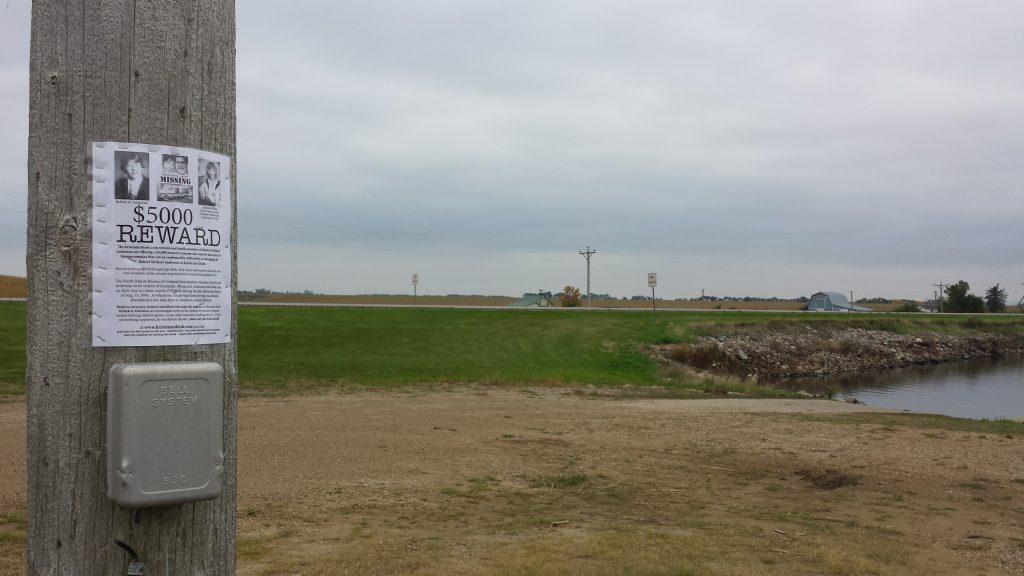 After dropping her son and daughter off at relatives in Wishek, North Dakota, in 1993, Kristin Diede vanished with her friend Robert Anderson.  ND investigators suspect foul play.

First broadcast almost 20 years ago to this day, this seems to be the only TV news coverage of this case.  Broadcast in October 0f 1995 by WCCO TV in Minnesota.   Click the > Play button. There are a few seconds of static before the video starts.

‘Kristin was my neighbor in MN’

Heather has been found!

In a previous post, we expressed interest in getting in touch with any friends of Kristin Diede’s from during her time in Bloomington, Minnesota, in particular a woman named Heather.

Last night we finally received the phone call we have been waiting for and were able to speak to not just Heather, but also an additional friend and neighbor of Kristins and who reported Kristin as missing.

We will be interviewing these individuals soon, both of whom have explicit memories of Kristin’s disappearance.

Check back soon for interviews.